As a proud member of the Better Building Partnership (BBP), Grosvenor Place Management is excited to share the incredible achievements by the City of Sydney-led collaboration. Seven years ago, Lord Mayor, Clover Moore brought Sydney’s major commercial landlords together to present the scale of the climate challenge and the city’s ambitious target for action – a 70 per cent reduction in emission by 2030. In FY 2017, despite the BBP portfolio growing 14 per cent, the partnership has cut total emissions by 52 per cent, energy use by 43 per cent and potable water use by 36 per cent from FY06 baseline.

Grosvenor Place is contributing to this partnership by working to reduce the building’s emissions.  Over the last 12 months, Grosvenor Place has managed to drop its kilowatt hours each month by offsetting energy usage through use of smart flexible solutions such as solar energy, off peak energy consumption and sustainable LED lighting technology. The building has 200 solar panels on the roof, generating renewable energy from the sun, making a total of 75 KwH used in the common areas. The building can offset base load power with 45KwH of energy harnessed from the rooftop solar panels. The building harvests its rainwater where the rain that falls on the atrium roof is captured and recycled, flushing 100 toilets over 12 floors.

The co-owners of Grosvenor Place – Dexus Property Group, Mirvac Group and Arcadia have committed to exceed the building’s own sustainability record and create a timeless contemporary icon in the Sydney commercial property market that honours Harry Seidler’s original vision. 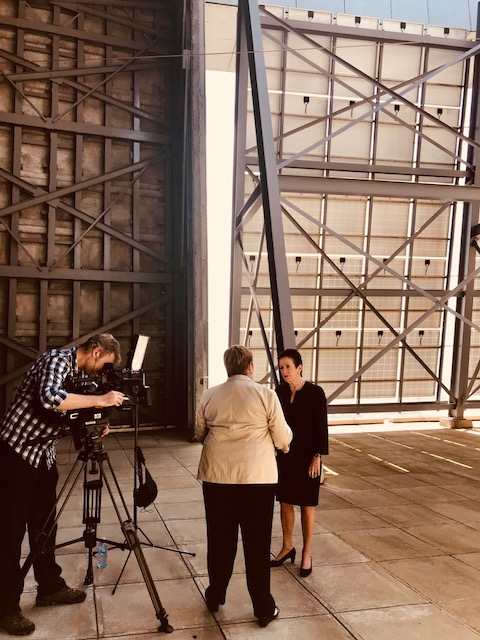 Sydney Lord Mayor, Clover Moore being interviewed by the ABC news crew next to the solar panels on the roof at Grosvenor Place.